On 18 August 2018 Kofin Annan, past UN Secretary General died at the age of 80. Annan often soft spoken was known for his sense of humor and his appreciation of political cartoons as examples of free speech. In October 2006 he gathered press cartoonists from all over the world at the UN to build a bridge between press cartoonists and different national cultures. Based on his initiative The Cartooning for Peace Foundation was established in Geneva, Switzerland, in 2009 with United Nations support. http://www.cartooningforpeace.org/en/

Political cartoons, like our Peace Newsletters, are intended to make us think. Often a good cartoon will shock the reader and may even offend since they are drawn to challenge the pre-conceptions of the observer. They can be very funny, but their main purpose is not to amuse you, but to persuade you, and even sway your opinion toward the cartoonist’s point of view. A political cartoon can be like a heavy stick hitting the head of a mule to get its attention. Cartooning often uses caricatures which can be insulting or complimentary, but usually serve a political purpose. Often the drawing is a visual commentary that exaggerates circumstances but should not alter facts. In all cases the political cartoon is intended to be a tool of free speech and public dialogue.

The Foundation has established an annual award for cartoonists whose work contributes to human rights, freedom of expression, tolerance and peace. The nominees are judged by a jury of 124 international cartoonists, Nobel Peace Prize winners, and the Mayor of Geneva.

Political cartooning can be dangerous in situations where intolerance exist and free expression is controlled by a nation state. When cartoonists are repressed in one time and place, others often fire back in media in their own nations. In many parts of the world state censorship is rampant.

Recently Isralei cartoonist Avi Katz expressed his opinion when Benjamin Neetanyahu and fellow members of the Lidud party celebrated after the adoption by the Israeli Knesset of a controversial nation-state law which sanctions Israel’s status as a Jewish nation-state. The law was considered discriminatory against non-Jewish citizens. His cartoon replicates a photo of a Likud group taking a celebration selfie. 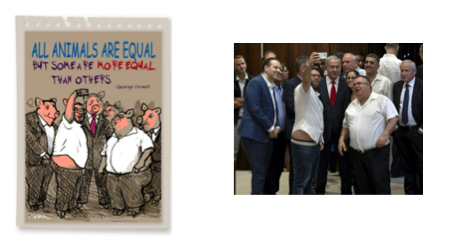 The cartoon led to so much political backlash that cartoonist Katz was dismissed from his position with The Jerusalem Report. Other journalists have since resigned in protest, and the cartoonist has received support from the Union of Journalists in Israel and the international group PEN America. Nissim Hezhyahu, founder and former president of the Israel Cartoonists Association organized an exhibition in response to Katz dismissal at the 18th Comics Cartoon festival in Tel Aviv in August 2018. Subsequently, cartoons supporting Katz have appeared internationally.